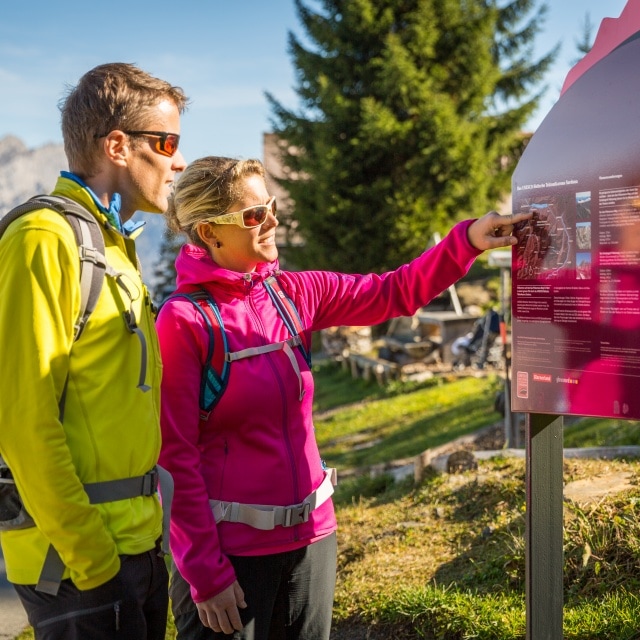 In October 2015, the Geophenomena Trail was renewed and new information panels were installed to explain the geological phenomena. The trail leads from the Habergschwänd mountain station via Talalpsee and Spaneggsee to the Fronalp Pass and runs partly along the official Sardona World Heritage Trail No. 73. You can learn how glaciers grind rocks, how moraines form, how the local rocks tell climate histories, and you can discover interesting facts about caves, the Talalpsee and the Hellloch-sinkhole.

The distance between the Habergschwänd and the Talsee is 2 kilometres. On this short stretch there are rocks with an age difference of up to 100 million years. All of them were formed as deposits on the bottom of a sea. Most of them are limestone rocks. In different places they contain petrified former sea dwellers, e.g. Assilines. Sometimes whole “animal cemeteries” can be found.

Silver and copper ores were mined on Mürtschenalp between the 16th and 20th centuries. The most important epoch was between 1850 and 1865, when the most money and effort was invested in mining. Up to 50 miners extracted the valuable ores during their heyday around 1850. Tunnels and relics from the smelting works still exist. The remains of the crusher, the barracks and the peat shed lie in the middle of the moor landscape of the Mürtschental, a visit to which is easily combined with a hike to the Murgseehütte and the Murgtal with its Swiss stone pine reserve. The former Mürtschen mine can only be visited as part of a guided tour.

Guided tours for groups by appointment.
Trained Sardona GeoGuides will gladly guide you on the Geophenomena Trail and through the World Heritage Site of Sardona.

Hiking tip: Combine the Geophenomena Trail with the Glarus Schabziger Höhenweg for a one- or two-day round hike!