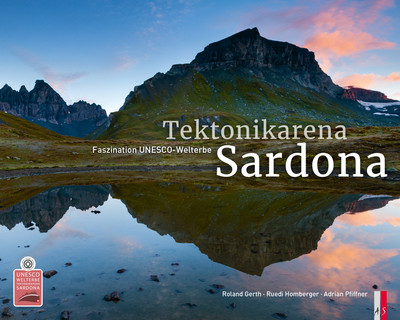 There was a lot of rumbling this spring in the Glarnerland and once again it became clear: In the UNESCO World Heritage Site Tectonic Arena Sardona is still a long way from standstill. Nowhere else in the world can you experience mountain formation - just over an hour from Zurich - as impressively as in the border region of the three cantons of Glarus, Graubünden and St. Gallen. The new richly illustrated non-fiction book offers an emotional approach to the topics of geology and tectonics to interested laymen via a unique visual world and reveals how the Alps were created.

The UNESCO World Heritage Site Tectonic Arena Sardona is one of the most pristine and unique alpine landscapes in Europe. The diversity of plants, rocks and waters makes the Tectonic Arena Sardona an oversized classroom that provides an insight into millions of years of our earth's history - in a place where lizards and dinosaurs as well as fish, trees and ferns have left their traces.

The new non-fiction book shows - in spectacular and large-format colour pictures as well as competent and easy to understand basic texts and graphics - the adventurous history of what science until recently only described as the "Glarus Thrust".

Available only in German

In bookstores, shops are listed here: AS Verlag