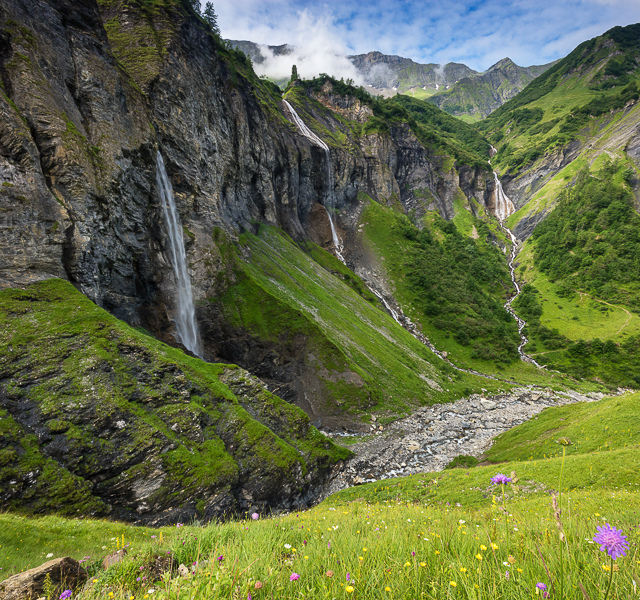 The five idyllic waterfalls – all between 86 and 45 metres high – rush over the steep cliffs, transforming the Batöni basin into a natural spectacle.

Not only the sight is overwhelming, the energies released are seemingly high and uplifting. In esoteric circles, the Batöni waterfall arena is one of 55 Places of Power throughout the Heidiland holiday region, documented in collaboration with the Swiss Research Centre for Places of Power. These so-called places of wonder can be discovered in 15 circular hikes. Special hiking descriptions not only point out energetic findings, but also recount historical facts, legends and traditions.

The easiest way to access the waterfall arena is from Weisstannen. The hike there and back takes about three hours (7 km / 590 hm). Section 4 of the Sardona World Heritage Trail No. 73 from Weisstannen to the Sardona Hut SAC also leads past the Batöni waterfall arena. And since the Batöni waterfall is located in the federal hunting ban area “Graue Hörner”, there is a good chance that you will be observed by curious chamois, deer or ibex on this hike.