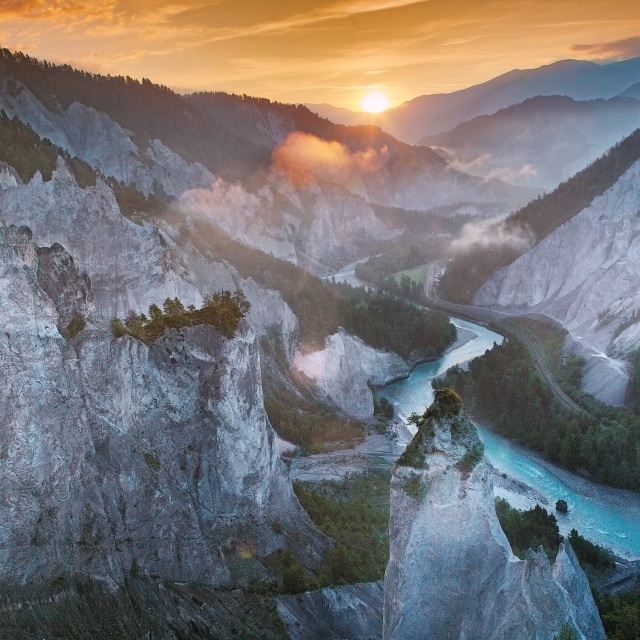 The Ruinaulta in Grisons is one of the most diverse landscapes of the Alps – a rugged gorge with an untamed river, white cliffs and rich forests. The quiet lakes appear to have a magical water source, rare birds breed in the floodplain forests. Even orchids can be found in this paradise.

The history of the Rhine Gorge began with the huge Flims rockslide. 9450 years ago over 7 cubic kilometres of rock broke loose above Flims, between Flimserstein and Piz Grisch. They plunged 1000 metres down into the Vorderrhein (Anterior Rhine) valley and buried the area between today’s villages Castrisch and Reichenau, an area of 50 square kilometres. The scree is several hundred metres thick. The Vorderrhein could no longer flow in the direction of Lake Constance, so the natural dam formed a lake. Most of Lake Ilanz, as it is called, probably remained in existence for about 1000 years. Over time, the river gradually cut its way deep into the landslide masses, Lake Ilanz drained and the Rhine Gorge – the Ruinaulta – was formed.

White cliffs, the young Rhine, fabulous forests and turquoise lakes – the nature of Ruinaulta is beautiful. The total length of the gorge is 14 kilometres.
The enormous steep walls of the Rhine Gorge are called Ruinas. They reach a height of 350 metres and consist mainly of small pieces of rock. A fine white powder connects the rock debris seamlessly, so that the whole structure looks almost like a solid rock wall.

Tip: Hike from Flims Waldhaus to Lake Cauma and on to Conn to the viewpoint “Il Spir”, where you can enjoy a fantastic view of the Rhine Gorge from the perspective of a swift.