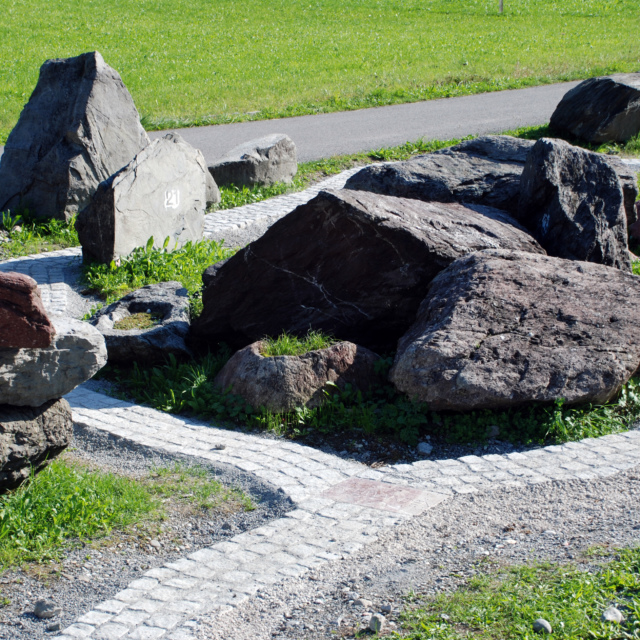 The variety of different rocks in all kinds of shapes and colors in the Sardona World Heritage Region is related to the traces of Alpine formation that are particularly visible in this region. Each stone tells its own story of its origin and existence. The Glarus Stone Trail invites you to observe, to be amazed and linger. Everyone is welcome to embark on this geological time travel of 300 Million years.

The branched paths through this rock garden, laid out with cobblestones, represent the Linth, the Sernf and the Löntsch as the prominent water streams in the Glarus region. You can walk on them without getting your feet wet. Yo can walk through the canton of Glarus in miniature, so to speak.

The specificall placed boulders represent the geology of the Glarus region and indicate which rocks occur where. Furthermore, the boulders also tell “history” that goes back millions of years. A time in which dinosaurs and other creatures lived that no longer exist today.

The stone trail begins with the “Lower Freshwater Molasse” at Hirzli near Niederurnen. These are the youngest rocks of the region, formed almost 30 million years ago, and ends at the Tödi with a granite from the Aar Massif that is over 300 million years old.